Higher prices for gasoline and natural gas are expected to raise heating costs for consumers heading into the winter months. A spike in demand for natural gas is common every winter, driving prices higher as well as intensified this season due to supply issues. Crude oil prices reached levels not seen in seven years as a gradual increase in demand and supply constraints contributed to price pressures.

Rising mortgage rates in October increased concerns about housing affordability for millions of Americans. Limited housing supply and elevated home prices have been an issue for home buyers for over a year. The onset of ri

sing rates is expected to exacerbate the issue, putting home purchases out of reach for many Americans.

Social Security recipients will see a 5.9% increase in benefit payments starting in January 2022. The increase is the largest since 1982, adding an average of another $92 per month to an average monthly benefit of $1,657 per recipi

ent. The Social Security Administration bases benefit adjustments on the current inflation rate, measured by the Consumer Price Index. The COLA (cost-of-living adjustment) is based on the most recent inflation rate and revised each year. As of September 2021, there were 69.9 million Americans receiving benefit payments from the Social Security Administration.

Equity markets were resilient in October as the Dow Jones Industrial Average, S&P 500, and the Nasdaq indices all reached new highs despite supply chain constraints, inflationary pressures, and rising rates.

Employment costs for wages and salaries in the private sector rose 4.6% over the past year compared to 2.4% for state and government positions. Employers are having to raise compensation and pay incentives in order to attract skilled workers for the 10 million open positions nationwide. Economists view the escalation of pay as wage inflation, affecting company margins and igniting further inflationary pressures.

More economists are expecting current inflationary trends lasting longer than anticipated and not transitory as the Federal Reserve had initially suggested. Contributing to inflation are supply strain constraints and rising labor costs, as well as demand increases for energy and food.

Millennials are becoming a fierce force in the U.S. economy, representing nearly 22% of the U.S. population, surpassing Baby Boomers which now account for roughly 21.5% of the population. Federal Reserve data show that millennials now represent over 5.5% of wealth held by the various generations, compared to 4.4% before the pandemic. Baby Boomers now represent 54.1 of wealth, down from 51.4% prior to the pandemic.

Major equity indices were up in October, with the Dow Jones Industrial, S&P 500 and the Nasdaq Indices all reaching new highs. Equities were resilient to supply chain constraints, inflationary pressures, and rising rates. Earnings were mixed as various companies struggled with lack of materials and components for products, affecting sales and revenue growth estimates. 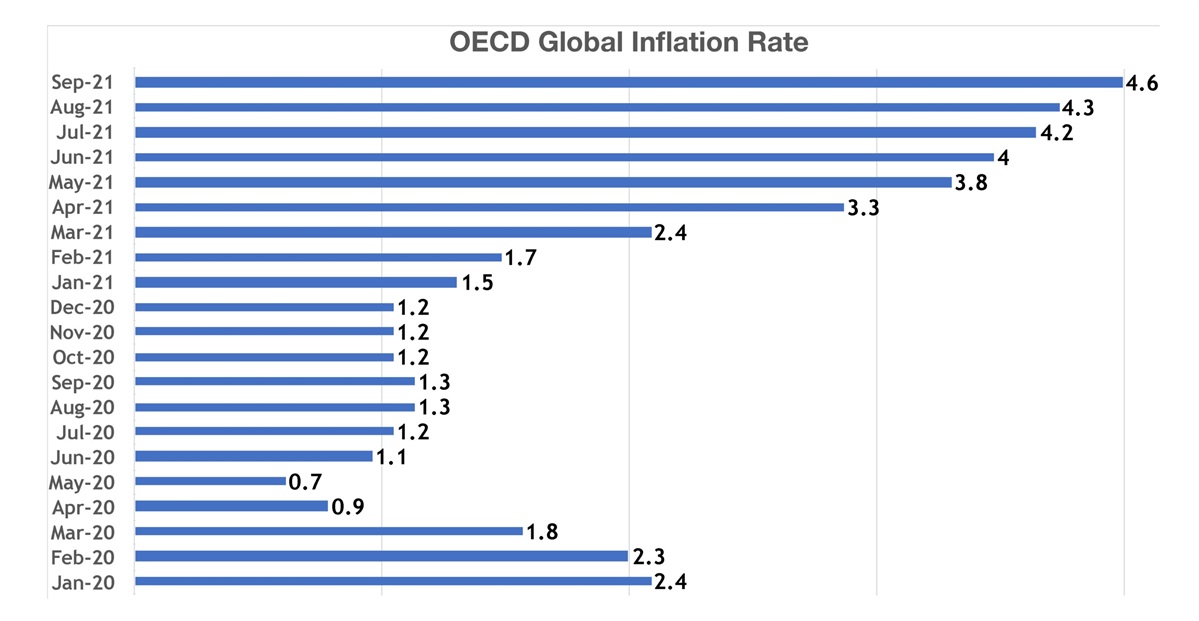 Currently, 38 developed and emerging countries make up the OECD (Organization for Economic Cooperation and Development), which monitors living standards of citizens worldwide and creates policies to facilitate better conditions.

Social Security recipients are due to receive the largest increase in benefits since 1982, but for many recipients, the increase in payments will go towards higher Medicare costs.

Many are concerned that the benefit increase may not cover expenses that are rising at a faster rate, including other essential items such as food and housing. The latest increase also affects the premiums for Medicare Part B, which covers doctor visits and outpatient care. Medicare premiums are expected to increase at the beginning of the year, minimizing net increases in Social Security payments.

The establishment of Social Security occurred on August 14, 1935, when President Roosevelt signed the Social Security Act into law. Since then, Social Security has provided millions of Americans with benefit payments. The payments are subject to automatic increases based on inflation, also known as cost-of-living adjustments or COLAs which have been in effect since 1975. Over the years, recipients have received varying increases depending on the inflation rate. With low current inflation levels, increases in benefit payments have been subdued relative to years with higher inflation. The COLA adjustment for 2022 is a steep increase from the adjustment of only 1.3% from this past year.

More Workers Are Quitting Than Ever - Labor Market Overview

A shortage of qualified workers across the country is encouraging companies to raise wages in order to attract direly needed employees. The competition for employees is enticing workers to quit their current jobs for higher paying opportunities.

Each month the U.S. Department of Labor releases employment data that includes how many workers are actually quitting their jobs. The data is considered a critical barometer of the labor market’s health and an indicator of economic growth.

The “quits rate” essentially measures how many workers quit their jobs voluntarily as opposed to being fired or laid off. Many economists and analysts follow the quits rate closely because it reveals how confident workers are. These same workers are also the consumers that the Fed monitors to determine if their confidence is allowing them to spend more, thus lifting economic growth. The most current data shows that the quits rate rose to 2.9, reaching the highest level ever.

Following the financial crisis in 2008, the quits rate dropped as workers were less confident in leaving a job they had, rather than look for another job opportunity. Meanwhile, threats of layoffs and firings lingered following the crisis years of 2008-2009.

Macro Overview-Geopolitical rifts emulating from the Russian invasion of Ukraine roiled financial and commodity markets globally as uncertainty arose surrounding the extent of the conflict. Ramifications from the conflict could take months.