Geopolitical rifts emulating from the Russian invasion of Ukraine roiled financial and commodity markets globally as uncertainty arose surrounding the extent of the conflict. Ramifications from the conflict could take months or longer to unfold, as imposed sanctions on Russia may ripple through the global economy affecting energy, technology, and food industries.

Inflation rose to a 7.5% annual rate for the month of January, the highest since February 1982, influencing the direction of interest rates across a multitude of consumer loans. There is growing hesitation about such reliance on lagging inflation data since leading economic indicators are starting to signal a slowdown in various areas. The Ukrainian conflict may add to near-term inflationary pressures, yet derail economic momentum as various energy sensitive industries face higher costs.

Russia is currently the world’s third largest exporter of oil and third largest wheat producer, two commodities expected to be impacted throughout Europe and globally as tensions unfold. Ukraine supplies about 13% of global corn exports and 12% of global wheat exports, much of which is imported by China and Middle Eastern countries.

Falling Covid cases across the country are prompting more states to ease mask requirements while others retain existing rules. More liberal restrictions have allowed a growing number of businesses and restaurants to expand operations and revenue.

Central banks worldwide may need to recalibrate monetary tightening policies as persistent inflation and a possible global economic slowdown will be challenging to combat simultaneously. The Federal Reserve is expected to start raising rates this month as it keeps its pledge to stem inflation.

Rising gasoline prices nationally may be hindering consumer confidence, as a larger percentage of incomes is spent at the pump rather than on other items. Excessive fuel price increases can also stifle economic growth since the U.S. economy is still very dependent on oil and gasoline.

As one of the leading producers of energy worldwide, Russia exports essential energy products  to Europe and Asia. Roughly 60% of Russia’s exports go to Europe while another 20% end up in China, Russia’s two largest energy trading partners.

Various commodities are rising in price as the invasion of Ukraine has delayed and halted exports of wheat, corn, oil, rare earth metals and natural gas. Global commodity markets are seeing prices rise to levels not reached since 2008, inflicting inflationary pressures on countries and industries worldwide. 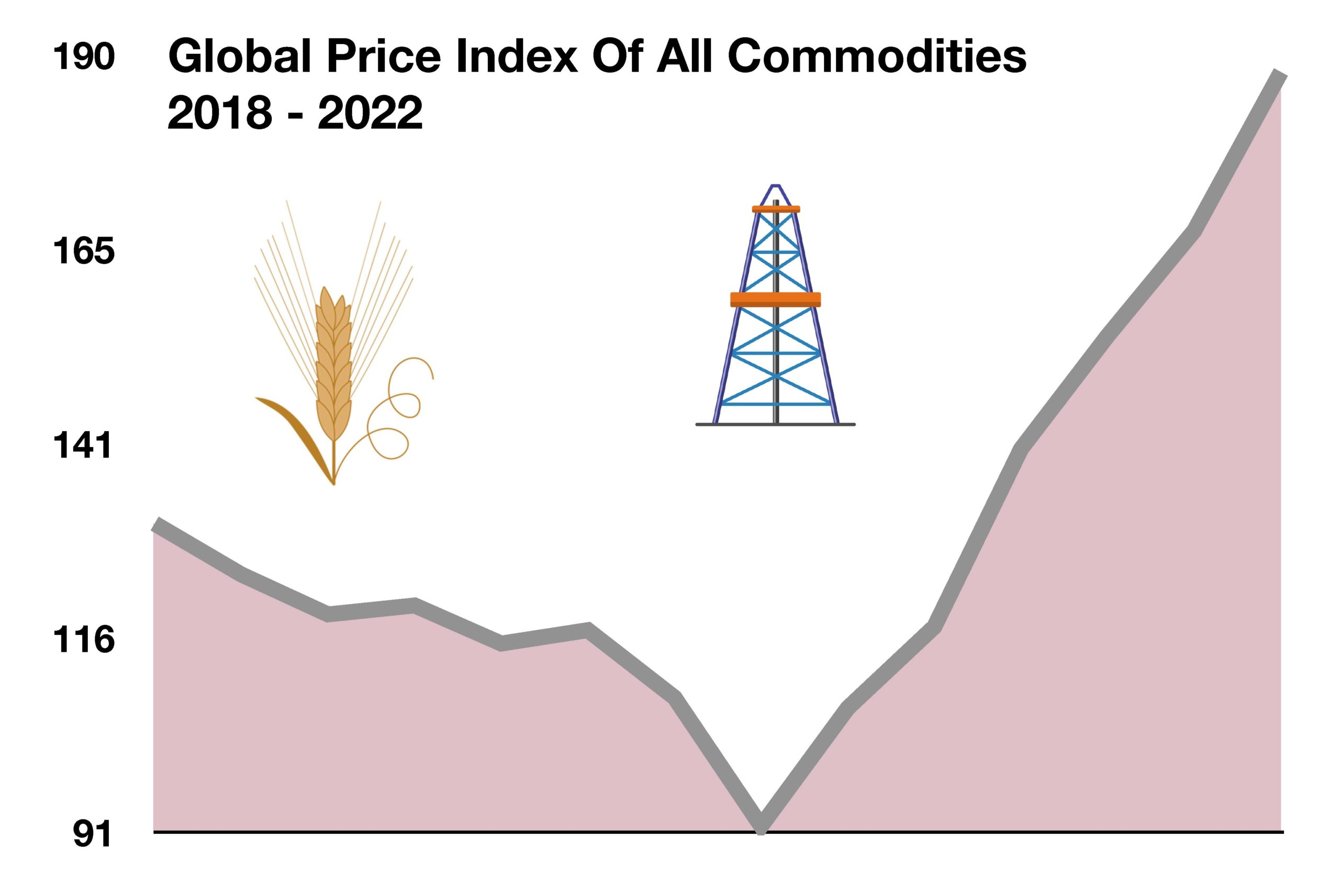 Global equity markets reacted to the Ukrainian crisis broadly, with a range of equity sectors experiencing pullback and volatility. Developed and emerging equity markets fell in February as uncertainty grew surrounding the invasion. Of the eleven S&P 500 Index sectors, energy is the only sector posting gains for the year, with technology, real estate, and consumer discretionary stocks posting the largest pullbacks.

European equities are experiencing the brunt of the invasion, as essential energy and food supplies have disrupted numerous industries. European consumers are seeing rapidly rising inflation, curtailing their expenditures.

Tensions surrounding the Ukrainian crisis may create additional inflationary pressures simultaneously as economic growth recedes, thus complicating efforts by the Fed to stay the course on its rising rate objectives.

Bond analysts are carefully following the onset of an inverted yield curve, meaning when short-term rates are higher than long-term rates. Short-term yields this past month rose in anticipation of a Fed hike in March, yet with longer term bond yields having little if any increase. Such dynamics have “flattened out” the yield curve where yields are very similar for short-term and long-term bonds. Economists view an inversion as a predecessor to a possible economic slowdown or recessionary environment.

Even as the United States has curbed its appetite for oil and gasoline over the past few years, demand among emerging economies has increased. Fossil fuels, including natural gas, petroleum, crude oil, and gasoline still account for roughly 80% of energy consumption worldwide according to the International Energy Agency.

Since oil is a primary energy source, rising oil prices can quickly translate into higher prices in different parts of the economy. Inflation, as measured by the Consumer Price Index (CPI), is made up of various components, including energy, food, and transportation. These three components represent about 20% of the CPI, all of which are directly affected by oil prices. As a larger portion of consumers’ budgets is spent on these three, the less disposable funds consumers will have to spend on other items.

Crude oil is priced in two primary markets, international Brent and as domestic West Texas Intermediate (WTI). Both are priced per barrel and determined by multiple factors, including production, supply, demand, economic growth, weather, and geo-political issues. Unfortunately, Brent and WTI prices had already been rising due to supply constraint issues and increasing demand. The emergence of the Ukrainian conflict has propelled prices even higher, eclipsing $100 per barrel for Brent in February, a level not reached since 2014. 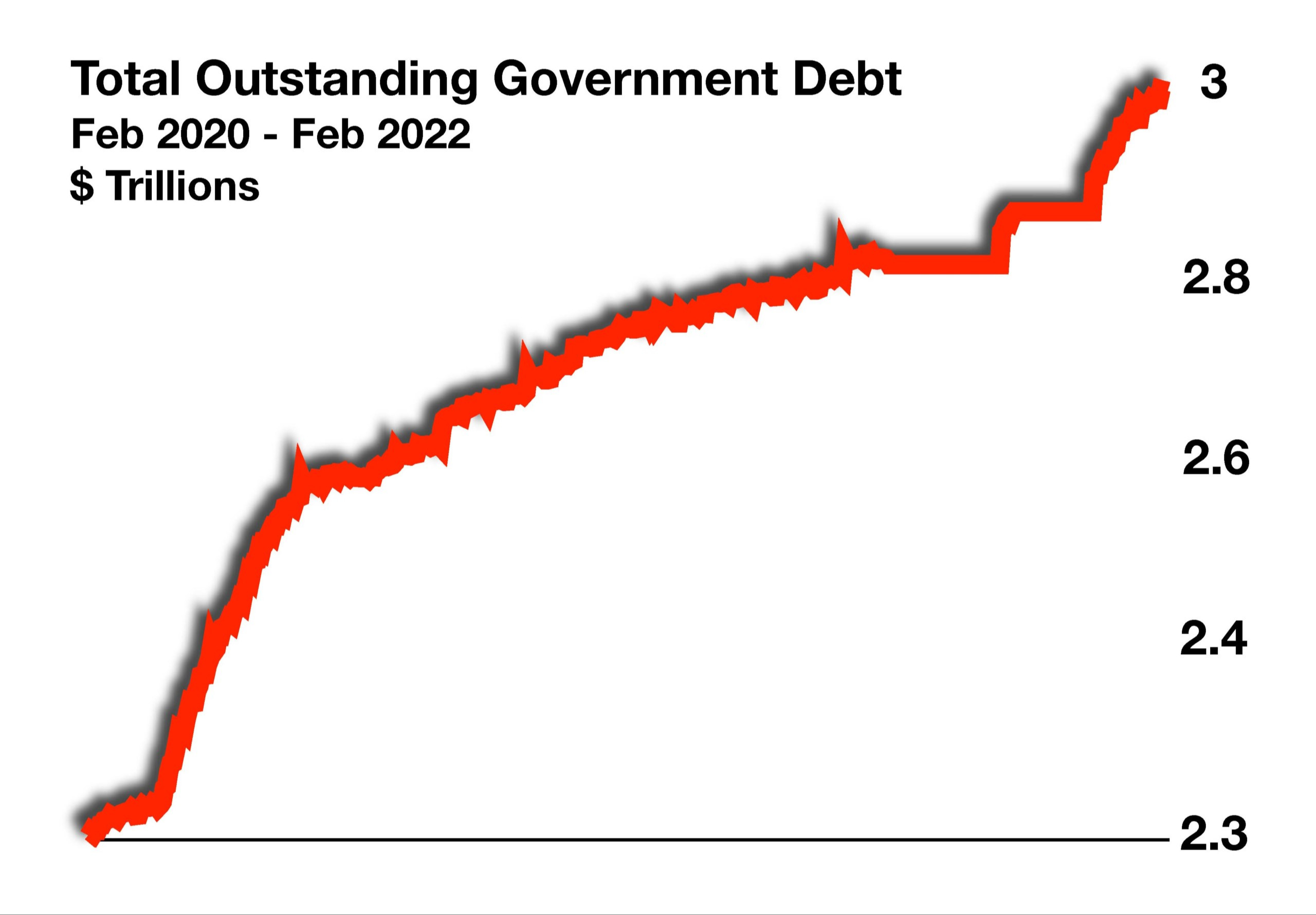 The issuance of debt by the U.S. government since the beginning of the pandemic in March 2020 resulted in another $7 trillion being added to total debt outstanding. As of the end of February, total debt outstanding amounted to over $30 trillion, triple to where it was during the financial crisis of 2008.

Economists view the nation’s debt as a burden on fiscal policy, as debt payments can hinder public spending in other more productive areas. Rising interest rates are also a concern as the cost to borrow increases for the government.

Public debt includes all debt issued by the Federal Government in the form of U.S.Treasury bills, notes and bonds. As shorter term bills and notes come due, they are usually paid for by the issuance of new debt. The Fed’s pending rate hikes this month will increase borrowing costs for the U.S. immediately, as short-term debt comes due and is reissued.