Stimulus payments from the second pandemic relief package were received in January and February, stirring economic activity and increasing personal incomes and expenditures. Some economists, however, believe that the rise in incomes and expenditures are short lived and not consistent. An anticipated third round of stimulus payments is expected to produce additional consumer activity throughout the economy. In addition to cash payments, extended unemployment benefits as well as revised funding for small businesses are planned.

Over 72.8 million Americans have received a COVID-19 vaccination as of the end of February as reported by the Centers for Disease Control and Prevention (CDC). Those having been vaccinated with a first dose made up 14.6% of the U.S. population as of Feb 27th, with 7.1% having received a second dose. The recent approval of a single dose vaccination may help speed up the vaccination process for millions of Americans over the next few months.

The IRS began accepting and processing tax returns for tax year 2020 in February, later than usual because of delays related to pandemic relief programs executed in December. Taxpayers have so far flooded the IRS with returns eager to receive delayed tax refunds.

Oil and commodity prices rose in February as an increase in global market demand for energy as well as severe weather caused outages in various continents. Forced outdoor seating at restaurants and eateries as mandated by various states has caused an increase in demand for propane used in heating outdoor areas. Power outages in Texas due to severe cold weather revived concerns about the nation’s electric power grid and its reliability. Victims of the winter storms that affected Texas will have until June 15th to file individual and business tax returns, the IRS reported.

It is estimated by analysts and the Federal Reserve that the true unemployment rate is in excess of 10%, not 6.3% as reported by the Department of Labor’s most recent release. The disparity lies in how the rate is calculated and monitored.

Paused oil production in Texas, due to severe weather, drove crude oil and gasoline prices higher throughout the U.S. as refineries and pipeline distribution were shuttered.

Pentagon officials mentioned that roughly a third of all U.S. troops that have been offered the COVID-19 vaccination have declined it. Vaccinations are still voluntary for military personnel, but may eventually become mandatory as the FDA approves additional vaccines.

Food supply chains hindered by the pandemic have spurred higher meat prices as the costs of feed for cattle, hogs, and chickens have risen. Severe weather and transportation challenges have impeded supply chains across different regions of the country. The U.S. Department of Agriculture is forecasting an increase of 2-3% in food prices this year due to disruptions in production and higher commodity costs. 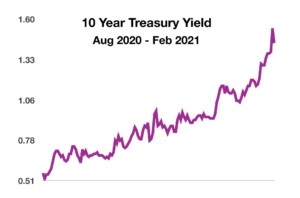 Rising rates in February affected mortgage and various consumer loans as the yield on the 10- year Treasury bond surpassed 1.5%, nearly three times the yield from its low of 0.52% in August 2020. The 10-year Treasury bond yield is closely followed by markets as a gauge for inflation and the possible presence of any economic expansion.

The Federal Reserve signaled that it would continue its ambitious program of buying $120 billion of treasury and mortgage bonds each month. The bond buying is meant to provide economic stimulus and stabilize interest rates.

Bond analysts believe that the Fed is distorting bond yields and prices by its ambitious buying of Treasury and mortgage bonds in the markets. Some argue that bond yields as well as inflationary expectations may actually be higher without any of the Federal Reserve’s supportive purchases of bonds. This is why markets are carefully monitoring Fed comments regarding continued bond purchases.

Mortgage rates and consumer loan rates rose in February as the yield on the 10-year Treasury bond reached 1.6% in trading during February. The rapid rise in yields has also affected other sectors of the bond market including municipals, corporate and mortgage backed securities.

For those that did not receive a stimulus payment in 2020 but believe that they were due one, a filing for the Recovery Rebate Credit can be done. In essence, anyone who didn’t get a check can request a tax credit for the amount owed. A tax credit is considered better than a tax deduction since a tax credit directly credits, or reduces, taxes owed. For example, if someone was due a $600 stimulus payment and never received it, then they can claim that $600 as a credit against any taxes owed. In order to calculate and determine eligibility for the credit, the IRS has created a Recovery Rebate Credit page available at https://www.irs.gov/newsroom/recovery-rebate-credit. Data released by the Commerce Department showed that personal income for Americans rose 10% in January, the largest increase in nine months and exceeding forecasts. The steep rise was primarily due to the second round of stimulus funds originating from the $900 billion pandemic relief bill passed in December and received by consumers in January and February.

Some analysts and economists believe that the income figures are misleading since the stimulus payments are only one time, not recurring. Traditional personal income figures include earned income from employment and unemployment income. Economists look for consistent increases in income rather than one time or temporary injections of stimulus funds as a validation of actual improvement in consumer income.

The price of food, from oranges to eggs to meat, increased at an annual rate of 3.9% in 2020 according to the Bureau of Labor Statistics. Prices are projected to increase 2-3% in 2021 as forecasted by the U.S. Department of Agriculture. The 20-year historical average increase has been a 2.4% increase per year.

Of the various food items seeing higher prices, meat has been exhibiting the greatest increase. Causes behind the jump in meat prices have been packing plant disruptions due to the pandemic.

The pandemic has also upended global food supply chains with delayed transportation and a lack of workers that have fallen ill to COVID-19. Rising commodity prices such as corn and wheat have added to higher feed costs for cattle, chickens and hogs worldwide, three of the largest meat products. Severe weather in various continents has devastated feed crops and created shortages in addition to pandemic related challenges.