There’s a growing consensus among various economists and market analysts that inflation could force consumers to cut back on spending to the extent that a recession materializes. Consumer expenditures have an enormous impact on economic activity, representing 70% of Gross Domestic Product (GDP)

Ironically, even the Federal Reserve seems to think that rising rates can pose a risk to the U.S. economy. The Federal Reserve Bank of New York released a report in early May identifying concerns members of the Fed have. Among the concerns are that elevated and persistent inflation, coupled with a sharp rise in rates could slow economic activity causing an increase in delinquencies, bankruptcies and other forms of financial distress. The report also identified uncertainty surrounding heightened commodity prices and geopolitical risks attributed to the ongoing Russian conflict.

Inflation seemed to have eased a bit in April, but underlying price pressures continue to identify gasoline and energy costs as the most acute for consumers. Recent data showed a decrease from 8.5% to 8.3% annualized inflation rate for all items, however gasoline’s 43% rise along with other energy products such as natural gas and electricity rising 30%, pose the greatest challenge to curtailing inflationary pressures.

Several senators, both Democratic and Republican, encouraged President Biden to maintain tariffs on imports from China, which were initially established by prior President Trump. Some had argued that the tariffs were inflationary to consumers, yet Chinese imports only account for 2 percent of the Consumer Price Index (CPI), which measures inflation. The tariffs are meant to protect U.S. companies and workers from low cost imports being “dumped” in the U.S. marketplace, thus adversely affecting U.S. companies and employees.

Federal Reserve data is indicating a rise in revolving credit card usage and a decrease in the savings rate. Consumer credit outstanding has risen the most since November 2001, when the economy was in recession. The Federal Reserve calculates that the average household is spending an additional $300 per month due to inflation.

Soaring transportation costs are translating into higher prices for companies and consumers nationwide. A gallon of diesel has risen to over $5.50 this past month from $3.17 this same time last year. Diesel is the primary fuel used for transporting goods via trucks, trains, and shipping.

The Federal Reserve indicated that it plans to raise short term rates again in June and July, but not as much as had previously been expected. Extensive inflationary pressures in conjunction with higher rates are thought to have begun a slowdown in consumer activity, a welcome sign for the Federal Reserve

The Wilshire 5000 Total Market Index, which includes every publicly traded U.S. company, has lost roughly $10 trillion in value since the beginning of the year, down from $53 trillion. Equities currently account for about 33% of household wealth.

Some analysts are viewing recent earnings from certain companies as misleading. Various companies are reporting increases in revenue, due not to an increase in sales but, because of an increase in product and service prices. Analysts prefer to see volume or sales increases rather than price increases as a favorable trend.

A strong U.S. dollar continues to weigh on multi-national company earnings, making up 40% of the S&P 500 Index. These are companies whose revenue are primarily generated overseas. Increases in inventory, labor costs, and supply constraints continue to weight on corporate earnings projections for the second quarter.

Short term and long term Treasury bond yields fell moderately in late May, known as a shift down in the yield curve. Such a dynamic may be representative of interest rates beginning to level off after a rapid rise over the past few months. The Federal Reserve indicated that it would raise short term rates again in June and July, but not as much as had previously been expected.

The average rate on a 30 year fixed mortgage fell slightly in late May to 5.10% from  5.25%, offering some reprieve to homebuyers. Mortgage rates are still well above the 3.11% average at the end of last year.

The retreat in U.S. Treasury bond yields spilled over to municipal and corporate bonds, where yields fell modestly for the month. Overall bond prices rose as yields fell for nearly all domestic bond sectors.

Regardless of a possible let up in the Fed’s tightening trajectory, further increases are expected over the next two months along with Fed balance sheet reductions which will place additional pressure on rates.

What’s Risen The Most - Tracking Inflation

Energy and fuel were among the top contributors to inflation this past year, with used cars, electricity and food all enhancing the tensions surrounding inflation.

Transportation costs have become a growing contributor to inflation, as the vast majority of food, produce, and basic consumer goods are transported using gasoline and diesel.The summer months are expected to be especially challenging for shippers and consumers, as the historically demanding summer months drive fuel prices even higher. Optimistically, the enormous rise in inventories is expected to ease inflation over the next few months, as an over supply of materials and finished products are expected to fall in price.

As the pandemic created supply constraints over the past two years, companies learned to stock up on materials and finished products in hopes of alleviating any future supply chain snags.

Now that constraints have lessened and various supply chains have resumed operations, companies have been accumulating raw materials and building a stockpile of finished products at an incredibility fast pace.

Historically, increases in inventory levels for companies is seen as an indication that demand for their goods might be weaning due to a pullback in business and consumer demand. As inventories swell, companies are eager to reduce stockpiles by discounting, which ultimately means lower prices for consumers.

As pandemic assistance funds vanish, consumers are turning to savings and credit to pay for essentials. With many consumers having exhausted their cash reserves, credit becomes an option. Con­sumers have been tap­ping into sav­ings accumulated from pan­demic stim­u­lus funds in order to keep up with in­fla­tion.

Even though overall wages have risen roughly 6% over the past year according to Labor Department data, the increases are still not enough to keep up with inflation running at over 8%. As households start to experience shortfalls, many resort to credit in order to meet month to month expenses.

Auto loans and credit card debt have seen the largest usage increases as tracked by the Federal Reserve over the past few months. Mortgage debt has also risen, but mostly at the upper end of the credit score scale. Credit scores on newly originated mortgages remain relatively high, reflecting continuing high lending standards by lenders. The median credit score of newly originated mortgages was 776 during the first quarter of 2022. Analysts also believe that median credit scores may possibly begin to fall as consumers tap credit cards and exhaust their cash savings. 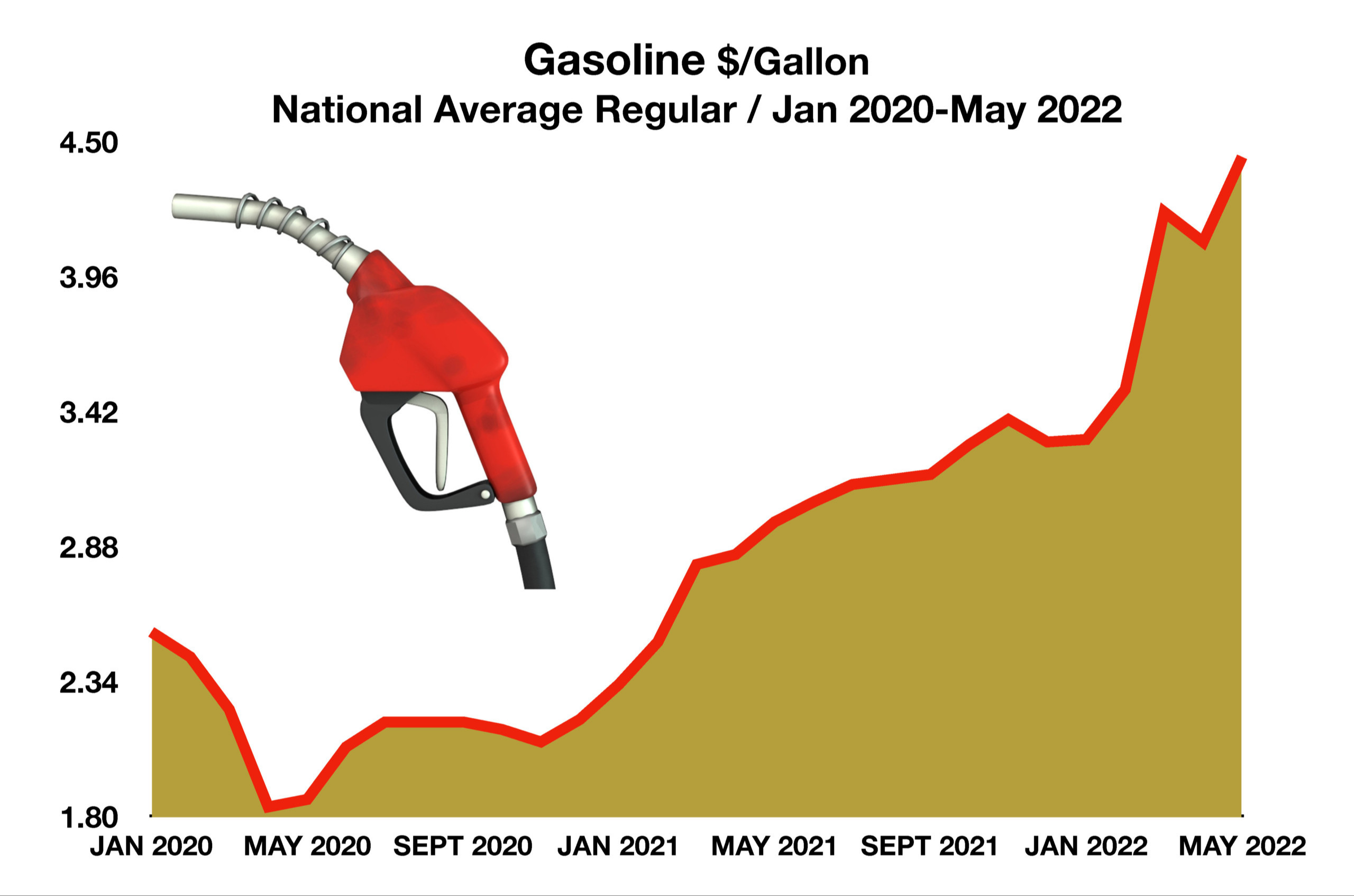 This summer, however, may produce exceptional prices, as continued supply constraints, shipping issues, and increased international demand for U.S. oil and gasoline driven by the Russian invasion of Ukraine. The EIA reported that the average price of a gallon of regular gasoline rose to over $4.00 in May for all 50 states, the first time ever.

Rising gasoline prices can become a burden for both consumers and companies. Not only are consumers spending more of their income on fuel, companies also pass along the higher costs of fuel to consumers. Higher fuel prices tend to filter down to the consumer since the cost of food, transportation, and travel are all affected by rising fuel expenses.

Macro Overview-Attention has shifted from inflation to recession as housing, wages, interest rates, commodities, and consumer expenditures have all receded from their highs, an indication to economists that an economic slowdown or...