Attention has shifted from inflation to recession as housing, wages, interest rates, commodities, and consumer expenditures have all receded from their highs, an indication to economists that an economic slowdown or recession may be evolving.

Numerous countries worldwide are restricting the export of food, adding to global supply constraints already causing shortages and hunger in various third-world countries. Such restrictions, which have been exacerbated by the invasion of Ukraine, are considered a form of food protectionism.

The EU imposed a partial ban on crude oil imports from Russia in response to the invasion of Ukraine. With energy prices already soaring in Europe, the ban is expected to cause even further inflationary pressures throughout the European region.

Consumers may not notice the price difference between gasoline and diesel at the pump, yet they will be indirectly affected by higher prices as transportation costs are passed along to consumers. Diesel is the primary fuel for railroads and trucking, which transport the bulk of consumer goods nationwide.

Russia missed payment on its government bonds in late June, which is considered a default by the international bond market. The last time Russia defaulted on its debt was in 1917, during the Russian Revolution. As a reminder, the Russian Revolution saw the abolition of the Russian monarchy and the beginning of Russia’s communist regime, a huge turn for the nation.

The Federal Reserve Bank of Atlanta estimates Gross Domestic Product (GDP) with a model it has been utilizing for years, with a very low average tracking error of just -0.3. The model, known as GDPNow, estimates GDP for the second quarter of the year at negative 2.1%, following another negative 1st quarter GDP of 1.6%. Many economists consider two consecutive quarters of negative GDP as indicators of a recessionary environment. Fed Chairman Jerome Powell said that the risk of a recession is heightened as rates continue to move higher, stating that a recession is not the Fed’s “intended outcome”, but that it is “certainly a possibility.”

Some companies over the past few weeks have also announced hiring freezes and layoffs in response to slowing economic activity. Fortunately, the cutbacks have so far been limited to a few industries including technology, mortgage lending, and popular pandemic-era companies. Various companies are believed to have over-hired during the past two years when growth was more prominent and costs were still contained.

Other signs of stabilizing inflationary pressures are present in the commodities market, where copper, oil, wheat, rice, and lumber continued to fall from their highs this past month. Lower commodity prices tend to help alleviate some expenses and inflation for consumers.

Gasoline prices eased a bit this past month with the national average for a gallon of regular gasoline falling to $4.87 at the end of June, down from $5.00 earlier in the month. As pricey as gasoline may seem, gasoline prices can be much higher in other countries, such as in Hong Kong where consumers are paying upwards of $11 per gallon.

Equity Indices Have a Rough First Half – Domestic Equity Overview

Energy was the only positive sector in the S&P 500 for the first six months, while the other ten sectors- including health care, financials, communications, real estate, and more- were negative. Consumer discretionary and technology sector stocks were among the worst-performing sectors, with consumer staple stocks among the better performers.

Second-quarter earnings, due for release in July, are expected to reveal how company profits fared with exceptionally elevated material and labor costs earlier in the year. Analysts are also sensitive to a growing consensus expecting a recessionary environment before the end of the year.

Many analysts expect the Fed to raise short-term rates at least once more by 75bps in July, with a possible pause thereafter. Some are even projecting the Fed to reverse course and start easing rates in 2023 should the economy fall into a recession. 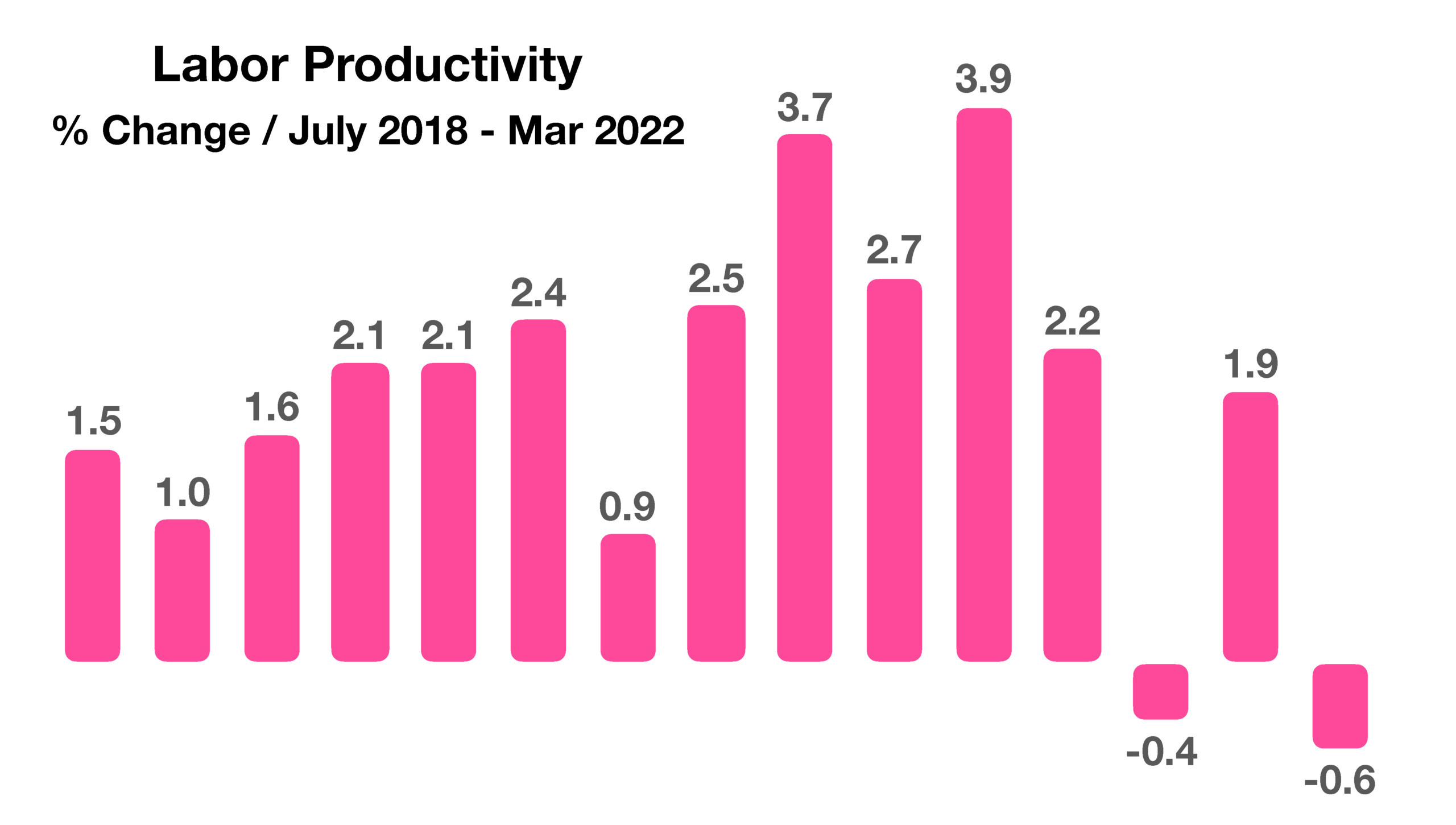 The most recent data released by the Labor Department revealed the largest quarterly drop in productivity since 1947, decreasing at an annualized rate of 7.5%. The drop in productivity was concurrent with the largest rise in labor costs since 1982. Both of these measures are also indicators of inflationary pressures for both companies and consumers. Many companies have been passing along higher costs to consumers, but can only do so for so long until competition forces companies to hold prices steady and absorb higher costs. This can also lead to decreased levels of hiring and lower wages as companies struggle to maintain profitability levels.

Data surrounding labor during the pandemic has been considered unreliable and inconsistent by many economists, meaning that the true effects of the COVID-19 pandemic and worker retention are still not certain. An essential data set is labor productivity, which is a measure of how efficiently companies are utilizing workers to produce products and services. This year, the largest four-quarter drop in labor productivity was observed since the fourth quarter of 1993 according to the Bureau of Labor Statistics, marking a historic decline in productivity.

Federal Reserve survey results, reported in the Fed’s Beige Book, have identified that a growing number of manufacturers and industrial companies are increasingly moving towards automation, replacing previously desired workers with robotic gear. Rising wages and a dwindling labor pool have forced some companies to resort to machines instead of hiring workers.

Consumers are now saving less than before the pandemic, as stimulus assistance funds and generous unemployment benefits have gradually evaporated, encouraging consumers to tap their savings at an accelerating pace. The drop in savings has been especially prolific for those nearing retirement. As markets have pulled back, so have retirement fund values, elongating the retirement threshold for many.

Savings rates rose dramatically in 2020 as billions of dollars in stimulus relief payments made their way into consumer accounts. Federal Reserve data found that households spent only 40 percent of their payments, used 30 percent to pay down debt, and saved about 30 percent on the initial round of stimulus payments. The spectacular rise in the savings rate to nearly 34 percent in April 2020 was a validation of how much of the payments went towards savings.

As additional relief programs along with generous unemployment benefits became effective, the savings rate remained elevated through the end of 2021. The most recent data show that the savings rate dropped to 5.4 percent in May 2022, lower than where it stood at roughly 7.5 percent before the pandemic began.

A Fed analysis found that lower-income households tend to spend most if not all of their income and end up having very little disposable income at the end of each month. Most lower-income households have already depleted their pandemic surplus funds in savings and are also being squeezed by inflation as food and energy prices continue to escalate. This has led to upper-income earners holding the most savings on hand, while lower-income savings begin to dwindle.