A year-end equity rally induced by a Trump victory lost momentum towards the end of December as doubts surfaced regarding Trump’s success in garnering support for his proposals from both Republicans and Democrats in the House and Senate.

Two thousand sixteen was laden with uncertainty surrounding rates, growth, oil, the election, and Brexit. The S&P 500’s 15% drop in February proved to be temporary, as did the 10-Year Treasury Bond yield drop to 1.36% in July following Britain’s vote to leave the EU. As many times before, the market’s resilience carried it out of negative territory and onward to positive gains.

Oil also made a powerful comeback in 2016, rising from $26 a barrel in February to $53 a barrel at year-end. The rise in oil prices was a result of OPEC production cuts and an abundance of production coming from U.S. producers, helping lead the U.S. towards energy independence.

Equity markets pulled back at year-end as a gradual shift from equities to bonds took place, encouraged by the recent increase in bond yields, making fixed income attractive relative to a couple of months ago. A traditional rebalancing occurs at the end of each year, either shifting assets away from stocks to bonds or from bonds to stocks. This occurs as multi-billion dollar pension funds reallocate asset classes as expectations adjust.

A number of banking and financial industry regulations are in question as Trump is expected to repeal various rules and provisions that many believe have hindered lending and consumer credit expansion. Trump will have the ability to repeal numerous rules and regulations almost immediately under the Congressional Review Act (CRA). The possibility of political hurdles and non-approvals for some of Trump’s appointments may cause uncertainty leading to volatility in the markets.

Two well regarded barometers of consumer confidence rose in December to higher levels. The University of Michigan’s preliminary consumer confidence index rose to 98 and the Conference Board’s Consumer Confidence Index rose to 113.7. Sentiment among U.S. consumers is critical to the health of economic growth as greater spending evolves from growing confidence.

Despite starting 2016 off to a rough start, equity markets propelled towards the end of the year. The Dow Jones Industrial Average was up 13.42%, the S&P 500 Index increased 9.54%, and the technology heavy Nasdaq Index gained 7.5% for the year.

The potential for economic growth due to a combination of personal and corporate tax cuts, government spending, and less regulation could eventually boost earnings for stocks.

With U.S. companies having reduced expenses and minimized debt exposure over the past few years, any increase in profitability margins have become difficult. This is why revenue growth will be essential for many U.S. companies in 2017 while contemplating a higher dollar, lower tax rates, and fewer regulations.

A validation that we are heading into a stock pickers market is the decrease in correlation that has occurred among stocks. When stocks are highly correlated it’s a sign that investors are all buying or selling the markets, but when correlation is low it’s a sign that investors are buying or selling specific stocks for specific reasons. Recent dynamics such as a higher dollar, rising rates, and possible import tariffs have created obstacles for certain companies. Deregulation, lower corporate tax rates, and infrastructure spending have created new opportunities for a host of other companies.

The dynamics of sector rotation engulfed the equity markets in the final two months of trading in 2016. Healthcare, utilities and consumer sectors saw an exodus as financials, energy, and industrials saw an in flow.

The Fed raised short-term rates in December as expected by a quarter point to between 0.5% and 0.75%, the first increase since December 2015. The Fed also announced that it expects to raise rates three times in 2017 contingent on economic growth and inflationary pressures.

Overall bond prices fell in the last two months of the year, meaning that yields rose. Of the various bond sectors, U.S. Treasury bonds experienced the most significant jump in rates. Rates rose following the election on the premise that growth policies set in motion by the new Trump administration would generate inflationary pressures and economic expansion.

The challenge for the Fed going into 2017 is the prospect of increasing economic activity, where higher inflation may need to be harnessed by additional rate hikes. Many believe that it will be more difficult for the Fed to maintain a careful balance.

For 2017, the IRS is revising more than 50 tax provisions for both individuals and business taxpayers. Any changes or modifications made by the new administration may or may not be applicable to 2017 taxes. So for the time being, the following IRS revisions are effective for the 2017 tax year.

Senior (65+) Medical Expense Deduction – ability to deduct medical expenses rise to 10% of AGI up from 7.5% of AGI.

Trump’s proposals aim to simplify taxes by reducing the number of brackets from the current seven, to three. Some argue that this simplification may actually raise taxes for single filers, rather than lower them. The current brackets, which have been in place for sometime, scale up from 10% to 40% over seven brackets, while Trump’s brackets scale up from 12% to 33% over three brackets.

The tax exemption on municipal bond interest has been broached as a possible elimination and is a fairly contested subject. The loss of the municipal interest exemption could make municipal bonds less desirable, making it more difficult for local counties and state governments to raise capital. Hence, this has become a highly politically charged decision.

In addition to Trump’s tax proposals, the Republicans under the House plan, have proposals of their own. The question is, on which proposals will the Trump and the House plan overlap and disagree.

The elimination of itemized deductions are a mutual goal for both the House and Trump tax plans. The House plan would only retain two critical deductions: mortgage interest and charitable contributions. All other deductions would be eliminated, including the deduction for state and local income taxes, property tax, and sales tax. The Trump proposals would retain most of these deductions, but cap them at the $200,000 level.

Both the House and Trump plan would repeal the estate tax, which allows families to pass along assets to heirs free of estate tax. The current maximum estate tax rate is 40%.

Small business owners would benefit immensely from proposals presented by the House and Trump. The House plan would limit the tax rate for pass through entities, such as S-Corps to 25%, while the Trump plan proposes a rate of just 15%. The Tax Foundation estimates that about 95% of U.S. businesses in the United States are considered pass throughs such as S-Corps. A Trump proposal for a cut in the corporate tax rate would reduce the rate from 35% to 15%.

Dodd Frank – An act signed into law in 2010 to regulate financial services and banking. Has become a burden to smaller community banks due to heightened rules and regulations. It has consequently made it more difficult for homebuyers to qualify because of strict requirements imposed.

Consumer Financial Protection Bureau (CFPB) – An agency formed in 2011 to protect consumers in the financial sector. Enacted as part of the Dodd Frank Act. The CFPB has been plagued by bureaucratic conflicts and ill experienced, overpaid employees since its inception, providing little benefit to consumers.

Volcker Rule – Enacted as part of the Dodd Frank Act. Restricts banks from trading their own bond portfolio for profit. Has led to less liquidity in the fixed income markets with banks not holding bond inventories.

Affordable Care Act (ACA) – Created as affordable health care for every American. Many believe that it just hasn’t worked.

Trans Pacific Partnership (TPP) – Free trade agreement with Asian and Latin countries promoting non-tariffs and lifting barriers to trade. Concern among many that it may not benefit the U.S.

China has been careful not to create any perceived issues with its currency since the yuan became part of the International Monetary Fund’s (IMF) special drawing rights in October 2016. This will allow the yuan to become a legitimate reserve currency along with the euro, pound, and dollar. China’s position in U.S. debt is at its lowest levels since 2010. Optimism about economic growth has led to higher inflationary expectations, which eventually translates into higher interest rates. Over the past two months, the yield on the 10-year U.S. Treasury has increased from a historical low of 1.35% to 2.45% at the end of December. As a gauge for mortgage rates nationally, the increase in the 10-year Treasury has also led to an overall increase in mortgage rates. According to data made available by Freddie Mac, the average rate on a 30-year fixed mortgage loan increased from 3.44% in August to 4.32% at December’s end. The concern economists have is that as mortgage rates continue to increase, home sales and affordability may begin to be hindered. 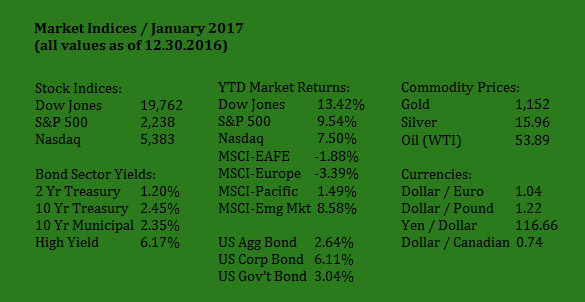