Markets reacted to indications that the Fed might slow its pace of rate increases heading into the new year. Such a change in monetary policy would be positively received by financial markets with the anticipation of eventual lower rates.

The supply chain constraints that existed this same time last year, have nearly been entirely eliminated. Production, shipping, labor, and material shortage issues were critical concerns during the height of the constraints. The alleviation of supply constraints has led to deep discounts by retailers which were widespread as retailers mark down prices on numerous items heading into the holiday season. Lower prices tend to dampen retail stock margins yet allow stores to reduce inventory and bring in consumer traffic.

A closely followed inflation indicator by the Fed, the Personal Consumer Expenditure Price Index (PCE), has been falling consistently since June. Data released by the BEA revealed a drop from 7 in June to 6 in October, signaling a drop in overall prices and inflation.

Recession fears continued to hinder markets from additional expansion, with growing concerns surrounding the labor market. John Williams, Federal Reserve President from the New York district, said that unemployment could reach 5% in 2023, up from 3.7% this past month. Regardless, the Fed’s primary objective of stamping out inflation remains key, meaning any further rate increases could slow hiring and raise unemployment even more.

Yields on U.S. Treasury bonds fell modestly in November, a vital benchmark for mortgage and consumer loan rates. The 10 Year Treasury bond yield fell to 3.68% in November, down from 4.10% at the end of October. Lower yields tend to offer a reprieve for consumers and businesses nationwide.

Earnings continue to be a focus, especially for companies exposed to consumer sentiment and the economic environment. Many retailers have discounted heavily in preparation for a challenging holiday season.

With the new year approaching, the Fed is expected by many analysts to begin slowing its rate hike trajectory. Currently, the Fed Funds Rate range is 3.75% to 4.00%, up dramatically from its two-year stint at 0%. The benchmark 10 Year Treasury bond yield ended November at 3.68%, down from 4.10% at the end of October. Mortgage, as well as personal loan rates, also fell adding buoyancy to consumer demand. 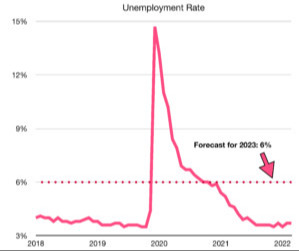 Essentially, the main reason for this high unemployment rate is the Fed’s continuous increase in interest rates. These increases have pushed the U.S. economy further into a recessionary environment, and are still expected to continue. While the Fed may slow down its raises to only 0.5 or 0.25 basis points instead of their usual 0.75 increases, the writing on the wall indicates that it may soon be time to pause these increases. If the Fed does not reverse course, high unemployment and a recessionary environment that discourages spending may be on the horizon.

Mortgage rates eclipsed 7% in late October 2022, their highest in over 20 years. This has discouraged countless potential buyers from purchasing a home and instead resorting to renting or staying where they currently live. Exorbitantly high rates are discouraging enough that the probability of individuals changing their primary residence in the next year has fallen to a record low.

A survey conducted by the Federal Reserve Bank of New York highlights this fall in consumers’ likelihood of moving homes. In March 2019, nearly 22% of people were likely to change their primary residence over the next year, which coincided with a strong faith in the economy and low mortgage rates of around 4%. However, as the pandemic disrupted this faith and a recessionary environment settled in late 2022, now only 14% of households are expected to change households over the next year.

The Fed continues to deliberate whether to continue increasing interest rates, which have a tremendous effect on mortgage rates, yet now has a plethora of other factors to weigh in. Housing prices saw their first fall in over 10 years in 2022, as fewer buyers wish to pay mortgages at increasingly high rates. Lower spending rates in the housing market could also hint toward a grim economic outlook for 2023. 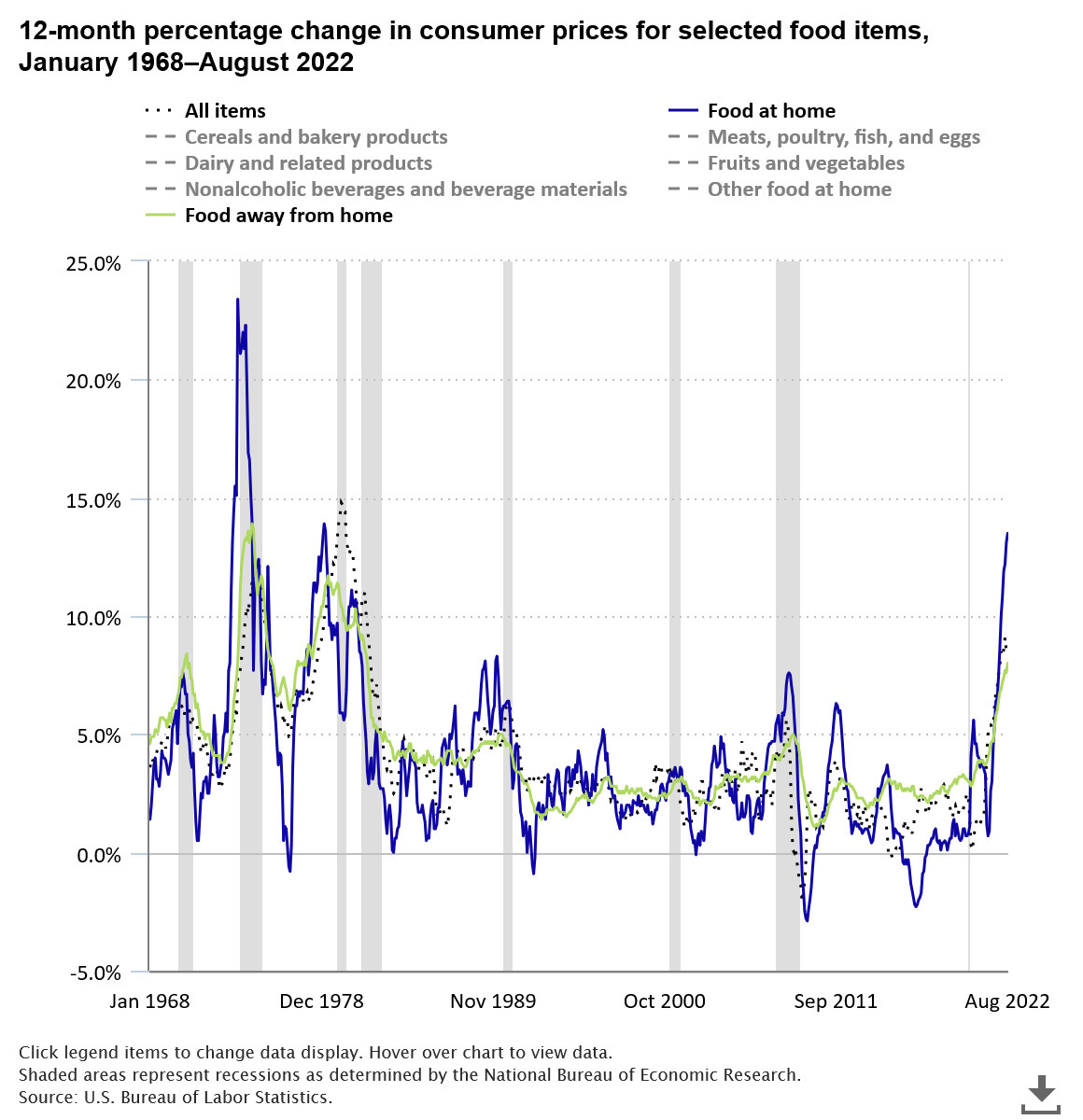 The most recent measure of food inflation is 8.2%, with 2022 inflation at the highest level since inflation in the 1980s, and the category seeing the harshest hikes appears to be food prices. Price jumps at grocery stores directly affect all consumers, pushing many to reconsider what they place in their shopping carts.

Currently, several food categories are at all-time inflation highs, meaning the price spikes from last year to now are the highest ever recorded. At the top of these categories is food at employee sites and schools, which encompasses the likes of cafeteria food at public schools. This category is up 91.4% from a year ago. Other categories also seeing all-time high price jumps are butter and margarine which has spiked by 32.2%, flour which has spiked by 24.2%, soup which has jumped 20.5%, cereal which is up 17.7%, and canned fruits and vegetables which have increased 19%. An additional category seeing tremendous spikes is the price of eggs, which over the past year has risen 30.5%.

These all-time high increases in food were a major factor of inflation measuring higher than expected. All of these common groceries have major effects on the decision-making of consumers. Due to inflation, consumers are increasingly only buying necessities and can be expected to ever further limit their purchases. Consumer spending makes up nearly 70% of GDP, so when consumer spending falls due to high prices, GDP can also be expected to fall.

The Organization of the Petroleum Exporting Countries (OPEC) is a group of nations that are the world’s major oil producers, producing more than half of the world’s crude oil. OPEC recently announced its largest cut to its production of oil since April 2020, dropping daily production by 2 million barrels. This decision is likely to raise gas prices for consumers across the globe and increases tension in already strenuous relations between Saudi Arabia and the United States.

Saudi Arabia, the de facto leader of OPEC, will voluntarily cut production while other OPEC members like Iraq may not be able to afford lower production levels. While Saudi Arabia denied that the production cut would harm Saudi-U.S. relations, U.S. officials see it as an act of aggression that may force a reconsideration of the already tense relations. U.S. officials also claim this to be Saudi Arabia siding with Russia, which has lost daily production of upwards of 1 million barrels per day due to its war with Ukraine. OPEC’s production cut could undermine the efforts of Western countries to move away from Russian oil.